Based on the various trend and sounding board sessions with experts, the two most impactful uncertainties have been identified at the intersection of journalism and education. This has led to the following questions:

1. What type of journalism do we educate for?

What journalism is and where it begins and ends, is up for debate. Its boundaries are fading under the influence of communication and commerce, but also because journalists themselves more often take a stand and intervene in a debate. It is not clear who or what a journalist is.

So the question is which journalistic role one is training for. Is that to become an independent truth-finder and interpreter, or to become a journalist who opts for a form of engagement, for example by collaborating with the public, with companies, or by dedicating himself to a particular cause?

2. Who is in charge of the learning process?

There is a broad trend in education whereby institutions are making their offer more flexible, so as to give individual students more space to make their own choices. At the same time, many institutions hold on to a diploma that is based on (nationally determined) competences.

The question is, therefore: who is in charge of the learning process? What degree of flexibility will education bring about and what room will the individual be given to personally determine what to learn, in which order, and what kind of journalist to become?

Based on these two questions, we determined the extremes of the axes. For the question What type of journalism do we educate for? the extremes on the axis are ‘independent’ versus ‘engaged’. In doing so, we distinguish between a journalist who adopts an independent position versus a journalist who seeks engagement and responds to what the public or companies want, or influences by taking a position.

In the second axis, representing the question Who is in charge of the learning process? ‘the institution’ and ‘the individual’ are the extremes on the axis. In one case, it is the (educational) institutions that determine the route an individual should take. In the other case, the individual determines what to learn and thus what the training or way of learning/development looks like.

The cross shape formed by the axes creates four different worlds. A very important, certain trend that runs through all scenarios is that the journalist is constantly confronted with new technology. That is why this part has been worked out separately for all scenarios, each with its own accents.

These four scenarios are intended to initiate a discussion about what the future of journalism education and professionalization in journalism might look like. 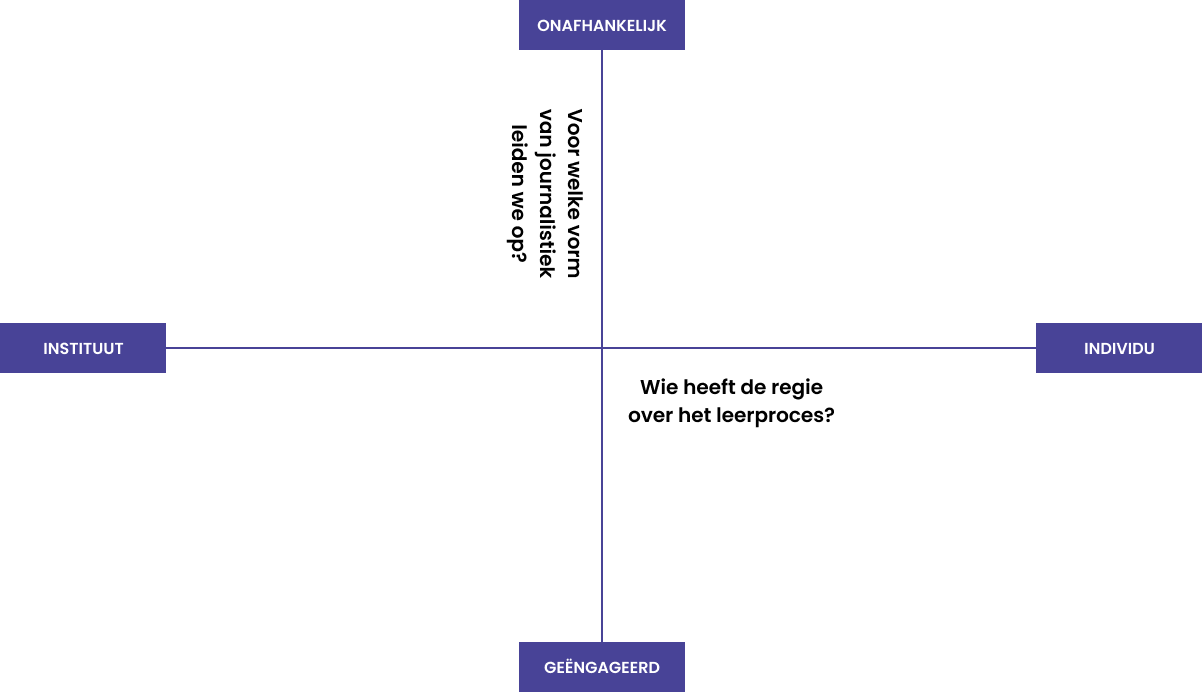 Journalismlab is an initiative of
Hogeschool Utrecht.